The online petition, created by Tom Brake, MP for Carshalton and Wallington calling for Southern to be sacked has clattered through the 1,500 signature mark in just a few days.  It is gaining momentum as the nation’s worst railway operator cut a further 341 trains in response to staff strikes and driver shortages.

The petition calls for the Rail Minister to put Transport for London in charge as just 70% of commuters were satisfied with Southern’s service in 2015.  This figure will have plummeted since, in light of recent cuts to services.

Tom, who faces delays himself, almost every time he travels, said: ‘This petition is for those who, quite frankly, have had enough of the appalling service that Southern has been delivering for the last few years. The problems have intensified this year, with works at London Bridge poorly managed and constant strike action, official and unofficial, leading to a dire travel ‘experience’ for hard working commuters. This petition will put more pressure on Rail Minister Claire Perry to dump Southern Rail who cannot be trusted to deliver rail services any longer and hand over the contract to TFL.’

Wallington and Carshalton MP Tom Brake has signed the Remembering Srebrenica Book of Pledges on the 21st anniversary of the massacre which saw over 8,000 men and boys murdered just because of their faith. Alongside this was the weaponization of rape and sexual assault, which became a tool of ethnic cleansing.

Tom joined the thousands of voices who say ‘never again’.

On the 11th of July 1995 General Ratko Mladic and his Bosnian Serb forces marched into the town of Srebrenica, which had been declared a UN Safe Area, and systematically murdered the Muslim population.

Remembering Srebrenica is a charitable initiative which since April 2014, has sent over 800 leaders and key figures to visit Bosnia to ensure the lessons of the massacre are learnt. Running parallel to this is a grassroots programme, which has educated 21,000 young people on the issue, seeking to safeguard future generations from the politics of division and hate.

Tom said: ‘The lessons that were learnt in the immediate aftermath of Srebrenica are as poignant now as they were then. The importance of community cohesion cannot be stressed enough, especially in the current global climate where too often our differences become points of conflict, rather than opportunities for personal growth and education. The memorial day an opportunity to remember the victims and survivors of Srebrenica, but also to work together in making our own community a place of safety that welcomes and cherishes people’s with different views and beliefs.’

To find out how you can get involved with the Srebrenica Memorial Week, go to http://www.srebrenica.org.uk/.

Police are appealing for information following an attempted robbery at the junction of Mulgrave Road and Bridge Road, Sutton, on Tuesday, 12 July at 02:30hrs.

A male suspect tried to grab a bag from a 38-year-old male victim. Despite the victim falling on his hands and knees in the struggle and being punched twice in the face, he kept hold of the bag, which contained a laptop computer.
Police are keen to speak to two men sitting on a bench near the junction at the time of the incident.

The suspect is described as a black man, aged 20-23. He was wearing a black T-shirt with white writing on it and a black jacket.

Aimed at boys and girls of all abilities and experience aged Under 5 to Under 14 (school year reception to 9), the attendees will be sub divided into age/ability groups with a maximum coach to child ratio of 1 to 8, the courses will include batting, bowling, fielding, fitness, games and use of the nets and bowling machine where appropriate.

Please note that the courses are open to both Sutton CC members and non members, so please bring along a friend.

Early booking would be appreciated as this allows us to hire the appropriate number of coaches in advance. 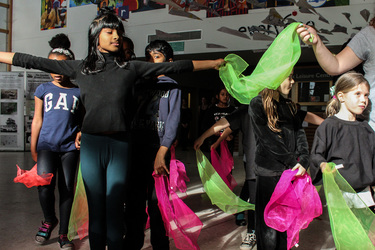 Imagine Festival of the Arts returns to Sutton, south west London, during October 2016 with a range of great events and shows that are certain to delight audiences. Between 15 and 30 October 2016 the borough will play host to the terrific BrickBox time-travel disco, a scintillating new sound installation from Output Arts, and Pint of Science’s boundary-pushing merging of art and science among many, many other great events – and the best part is that each and every one is completely free to attend!

The theme of this year’s Imagine Festival is famous author H. G. Wells, one-time resident of Worcester Park and writer of The War of the Worlds, The Island of Dr. Moreau, and The Time Machine. The Imagine Festival of the Arts is supported supported using public funding by the National Lottery through Arts Council England and Sutton Council.

For full details go to IMAGINE

Carew Academy held its first Enterprise Fair recently. What was initially planned as an activity for one class soon took off and was eagerly taken on by the whole school!

The Great Hall was filled with tables of crafts made by students including puzzles, jewellery, candle holders, stress balls and even Minion sweetie jars! Parents and carers joined us, making a bustling and exciting atmosphere, with everyone joining in with badge making, having their photo taken in the ‘photo booth’, and enjoying freshly made fruit kebabs.

The fair was an outstanding success and took a great deal of teamwork and planning by students prior to the event, alongside running the stalls on the day, which included some speedy mental arithmetic when dealing with sales. Looks like we have some budding entrepreneurs in our school!