The new building will replace a 1930s bungalow that had been extended over the years and had little architectural merit, according to Glenn Moore. With views from the site to the coast between Newhaven and Seaford, the design is influenced by the topography and the post-modernist movement, while paying homage to light houses, silos and
Anglo-Saxon roundhouses.

Glenn’s design evolved to respect the existing contours of the site. The lower floor sleeping wings have been cut into the slope to reduce visual bulk and use the natural insulation properties of the chalk strata. A green wildflower roof has been incorporated to soften visual impact.

The central circular turret provides internal access to the sleeping quarters at the lower level and gives access to the extensive grassed natural landscape outside. The central level contains the kitchen and living areas with access to the drive, garaging and storage wing which also has a green roof. The upper level contains a seating area and viewing balcony overlooking the sea. The turret roof is conical and clad in copper
which will be left to weather naturally.

Glenn explains: “The aim of the design is to be highly sensitive to the landscape setting. The dwelling is designed to directly respond to its setting within the plot. As such it
complies with the National Planning Policy Framework which states that development should function well and add to the overall quality of the area, and be visually attractive as a result of good architecture.

“The majority of the ground floor area lies tucked into the contour line and partially underground, meaning that little will be seen from the north east, from the village and in longer views. The circular roundel might be seen from these views, but it will be a smaller element than the existing dwelling.”

The floor area of the proposed dwelling is 375 m² including the upper viewing gallery. The building provides adaptable family accommodation for parents and teenagers’ accommodation, or guest accommodation. The design brief was to provide a flexible, inclusive, modern dwelling that respected its setting and would have a level of sustainability consistent with Passiv Haus standards. A key feature of the interior of the building is the spiral staircase acting as the central core and spine to the dwelling, filled with light. Inspired by the organic forms produced by nature and spirals of stairs within tall round structures or curved architectural buildings.

The lower floor incorporating sleeping accommodation is set into the existing slope while following the curved contours of the site. This, together with the green level roof linked to the car parking and reception levels ameliorates the visual prominence of this element. The overhang of the green roof, the use of non-reflective glazing and setting the fenestration to the inner wall plane will further reduce the visual impact and reduce solar gain.

Glenn added: “The overall design provides a strong link with the landscape and creates a positive reaction and balance with nature. To reflect the external presences, the house internally has been subdivided by the geometry of the circular and angular form. The building is broken into its component parts dictated by the geometry within the circle with the staircase being the central core. The predominant functioning parts of the home are on the entrance level, with sleeping, rest and play in the basement and the mezzanine providing solace and peace above the main functioning space.”

Client John Percival said: “Glenn’s many years of experience in Sussex and working in the National Park, and his Aussie sense of humour, was a great help, in working through the complexities of planning and design, and coming up with a successful result.”

Chris Williams of the Liberal Democrats has been elected as the councillor for the Carshalton Central ward following yesterday’s by-election (Thursday 28 July).

“I would like to thank all the candidates and our staff for their contribution to a successful by-election.”

The full results are available at the Sutton Council website by clicking here. 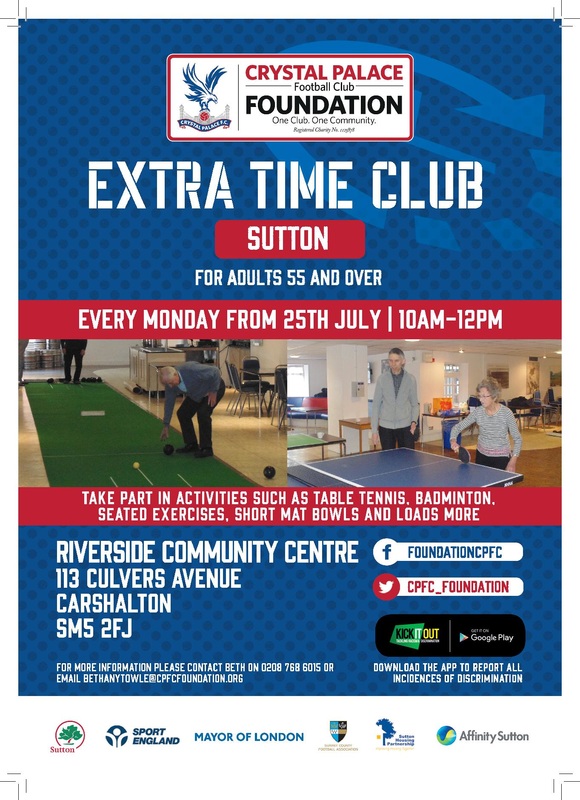 Why not use your extra time to join the extra time club which is being organised by Riverside Community Association and supported by the Crystal Palace Foundation. 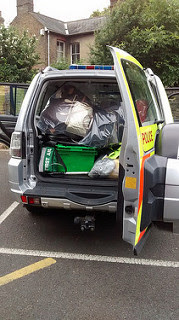 A joint operation by Sutton Council Trading Standards officers and Sutton Police has resulted in a large quantity of counterfeit goods being seized from stallholders at a car boot sale in the borough.

The goods removed included bags and jewellery purporting to come from such famous brands as Gucci, Louis Vuitton, Ralph Lauren and Chanel, as well as hundreds of copies of movies on DVDs.

Most sellers, who travel from outside the borough to set up their stalls, can expect to receive a formal warning or caution. Seized counterfeit goods will be destroyed.

A similar operation in Tiffin School, Kingston, resulted in several warnings being issued.

Both the authorities at St Philomena’s and Tiffin schools are supportive of the police and council “clean-up” operations.

Kingston and Sutton Councils said they will not tolerate counterfeit goods being sold in the boroughs and that further operations are planned.

“If the offending stallholders come to our attention again, it’s likely that they will face being prosecuted.”

“This operation sends out a strong message that Sutton is not the place to come to sell illegal goods. Buyers should be alert to the risks of purchasing unsafe and counterfeit goods.”

The full list of candidates for the by-election is as follows:

Residents who are eligible in the ward should already have received their polling cards – 8,144 cards were hand delivered between 1 and 24 July.

Anyone registered for postal voting should also have received their postal ballot papers, which were sent via first class post on Friday 15 July 2016.

You can also apply to get your lost or spoilt postal ballot paper reissued. Telephone the electoral services helpline on 020 8770 4179.

Ballot papers will then be taken back to the Sutton Council Civic Offices to be counted. The full results will be released on the council website on the morning of Friday 29 July.

​Four men who were jailed for producing significant quantities of cannabis in shipping containers at an isolated rural location in Sutton have been ordered to pay back a total of £239,941 at Croydon Crown Court.

All four have been given three months to pay up or face having their jail terms extended as part of the ruling made under the Proceeds of Crime Act.

Three of the confiscation hearings were held on Thursday, 23 June. The last one was on Monday, 25 July.
Steven and Maurice Brooks, who are brothers, Michael Searl and Leigh Yarrow were sentenced at Croydon Crown Court on Tuesday, 21 July 2015 to a total of 118 months’ imprisonment for running the factory at Lower Pillory Down close to Woodcote Park Golf Course.

At the confiscation hearing on Monday, 25 July, Steven Brooks, aged 43, (18.11.1972), of Lower Pillory Down, Carshalton, who received 54 months’ imprisonment for production of cannabis and possession of a firearm, was ordered to pay £186,346.80 or face a default sentence of two years and three months.

At the confiscation hearing on Thursday, 23 June, the outcomes were as follows:

The payments under the Proceeds of Crime Act go to the Home Office. All the default sentences would need to be served in full.

The confiscation proceedings were undertaken by an accredited financial investigator based at Sutton Police Station.

Sutton’s pro-active Crime Squad uncovered the factory when they raided an address at Lower Pillory Down on Tuesday, 11 February 2014. They seized 160 cannabis plants in various stages of growth, 350g of dried skunk cannabis, ten shotguns and more than £12,000 cash. The four men were incriminated by their own CCTV system, which they had installed to protect their business.

Sutton Borough Commander Dave Stringer commented: “These are significant amounts of money and we hope that this case sends out a message that crime doesn’t pay.”

The winners and runners-up of this year’s Sutton in Bloom competition have received their awards from Deputy Mayor Cllr Nali Patel at a ceremony at Woodcote Garden Centre in Wallington.

The best of the entries will represent the borough at the prestigious London in Bloom competition whose expert judges were present at the awards ceremony on Thursday 14 July.

The winners and runners-up in each category were as follows:

“Sutton is rightly renowned as green and leafy borough and I’d like to pay tribute to the hard work of the gardeners and growers who have put so much effort into establishing and maintaining the excellent gardens we’ve been so lucky to see in this year’s contest.

“Congratulations to all the winners and runners-up – and keep up the good work.”

Last year was a great one for the borough, with four Sutton Council-maintained parks achieving silver gilt awards, one park achieving a silver award, and Mr & Mrs Fawcett of Carshalton being awarded the Best Front Garden in Greater London.

“We are all so pleased to have won again this year, the children put so much energy and time into keeping their school looking beautiful.

“They all appreciate nature and want to make a difference to the environment. Visitors are always surprised that so many flowers can co-exist with over 500 children!”

Cycling Grants London will be offering grants of up to £10,000 over three years to projects that encourage London’s diverse communities to cycle more often and more safely.  The next round of funding will open on 1st August 2016 until 19th September 2016.

With the Olympics coming up, community groups are reminded that they need a TV Licence if they are planning to show summer events. TV Licensing has produced a new ‘Clubs and Community Group Viewing Guide‘.

If your community group plans to watch one-off TV events such as the Olympics, live concerts or big TV moments, you need to make sure you’re correctly covered by a TV Licence, even if it’s just for a short period of time.

For full details of the regulations go to LICENCE

Larcombe Housing Association Ltd has the primary purpose of providing residential care to older people and it does this through the provision of 22 places at Wellesley Lodge in Sutton. All of these places are for people experiencing dementia.

​The Association operates within a Christian ethos and is open to those of any faith or of no faith. It also provides a house of multiple occupancy for single people needing low cost accommodation and five self-contained flats for people with Special Needs. In the current year, and previously, we have been awarded a rosette from Care Home.co.uk for being one of the top 20 care homes in London.

“We are currently seeking voluntary trustees to augment the skills of the Board of Trustees and would welcome enquiries from those with general organisational, management and strategic development skills, especially if these have been acquired through related care or social services experience. There is a need for some specific skills and if you have experience in professional accounting or human resources we would be especially pleased to hear from you. The commitment is to quarterly meetings held early evening, some special meetings and to attendance at a few events through the year,” said a spokesperson.
​
A formal application will be required but for initial enquiries or an informal conversation please contact the Chair, Andy Wilson, on 07956 241264. For an application form and further details please e-mail Jo@wellesleylodge.co.uk